Six hundred people from all over New Zealand joyfully walked the streets of Wellington on Saturday, marching in defence of human life from conception.

The National March for Life, the first in the nation’s Capital since 1974, was organised to mark the 40th anniversary of the Contraception, Sterilisation and Abortion Act (1977), and remember the more than half a million babies whose lives have been lost by abortion.

The theme of the March for Life was love them both.

In a joy-filled atmosphere, families and individuals of all ages and religious backgrounds from the Far North to the Deep South gathered at the Civic Centre near Wellington’s waterfront.

Led by six teenage girls and accompanied by upbeat singing, the large group, holding pink and blue balloons, made their way to Parliament where they assembled on the grass for entertainment and speeches.

Ensuring the public watching the March were left with a message of hope and support, the newly launched Gianna’s Choice Mobile Centre followed the procession.  The rear of the van has a large advertisement, which informs abortion vulnerable women that they are not alone.

Hillary Kieft, a powerful pro-life voice and and an advocate for parental notification laws, spoke of her own abortion experience as a teenager.

“I know the heartache and the pain and the destruction and the depression and the suicide attempts of killing your baby” she explained.

“I was young.  I was scared.  And I was selfish.  It took me over 20 years to overcome and come to a place of healing.”

Mother of Divine Mercy Refuge youth, entertained the large crowd.  The young people come from families who have endured extreme violence.  Many are abortion survivors.  Hope and joy radiated from the group despite the difficult circumstances they have had to live in their lives.

To conclude, 500 pink and blue balloons were released.  Each balloon represented 1,000 pre-born babies who have lost their life to abortion in New Zealand since 1974, when the first abortion facility opened in Auckland.

The organisers wanted to mark the historic moment in New Zealand’s history by uniting all those who want to end abortion.

“Those participating in the March are not clanging cymbals,” Michelle Kaufman, March for Life Spokesperson said.  “These people walk the talk every day of their lives.”

“They leave the March energised, ready to continue serving women and families and be a voice for the unborn out of love.”

Plans are afoot to make the National March for Life an annual event. 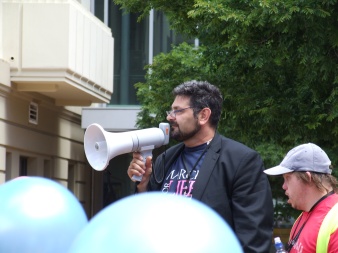 People from all over New Zealand attended. Photo Credit: FLI 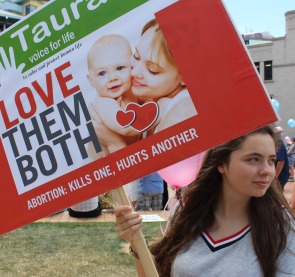 Some of the crowd on Parliament Grounds. Photo Credit: FLI